The workshop was a collaboration between three associates of Delft University of Technology: Mathieu Gielen, Bahareh Barati, and Aadjan van der Helm. It brought together the topics of ‘open play', ‘embodied interaction', and ‘interactive prototyping', to provide the students with an intensive yet comprehensive interaction design workshop.
During the first day of the workshop, the students were asked to explore the playfulness of everyday objects such as elastic bands, plastic balls, wooden cubes, etc. Starting with this introduction, Mathieu Gielen continued with introducing the concept of ‘open play experiences': a play experience in which the players are able to freely shape the contents of play - following their curiosity, expressing their creativity and enjoying the process. Then the students were instructed and provided with a support card set to describe the qualities of their envisioned open play experiences.
The second day of the workshop was dedicated to sketching the interaction and embodying those abstract qualities through playact and probe-making activities. Elaborating on the relationship between physical properties and action-possibilities, Bahareh Barati brought the importance of form-giving and enactment in exploring the possible interaction scenarios to the students' attention. A number of play-acting techniques, Wizard of Ozing the interactive behavior as well as various tinkering materials were considered to support the improvisation exercise.
During the third day of the workshop, Aadjan van der Helm taught the students how to develop a working prototype of the interactive play concept. Using interaction design technology tools such as Max/MSP (a visual programming environment) to create interactive behavior and also Arduino and Grove (technology to interface sensors and actuators), the students created simple interactive objects that could sense the environment, react and even communicate wirelessly with other objects.
During the fourth day of the workshop the students incorporated the interactive behavior in their open play concepts, reflected on the overall experience and iterated when necessary.
On the fifth and final day of the workshop, the students exhibited their open play experience concepts in the main hall of the Kish International Campus of University of Tehran. 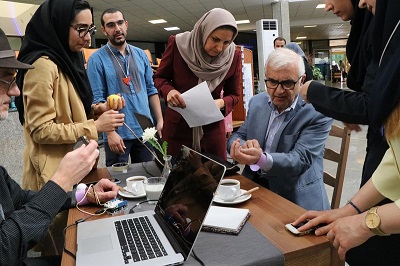 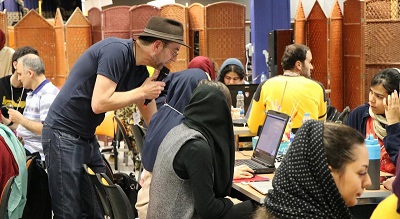