Kish Island has a unique situation in the strategic Persian Gulf region among tens of large and small islands. This island is so beautiful and attractive that it is known as the Pearl of the Persian Gulf since ancient times. Its calm coasts are covered with coral sands that shine in the sunlight, creating a unique and fascinating sight. The clear coastal waters allow one to view deep into the sea and watch the beautiful movement of the fish. Diverse plants and native trees, as well as a pleasant climate seven months a year are among the outstanding characteristics of the island.

Kish Island has a long history of about 3000 years. Kish Island is ranked among the world's 10 most beautiful islands and it is the 3rd most visited vacation destination in the Middle East. The relaxed atmosphere of the island has changed it to a mental-health break resort. Foreign nationals wishing to enter Kish Free Zone from legal ports are not required to obtain visas prior to travel. Valid travel permits are stamped for one month by the airport and Kish port police officials. The official language on the island is Persian, but English is also spoken by some shopkeepers, residents and students who live on the island.

The weather in Kish Island is warm and humid. The average temperature is 27 °C and rarely surpasses 35 °C. July and August are the hottest months and the temperature reaches its lowest in January and February. The lowest temperature never falls blew 5 °C and that can be expected only a few days in the winter.

Kish has a low precipitation, therefore, the island's vegetation can withstand heat and does not depend much on water.


In spite of the low precipitation, humidity is relatively high due to the region's special climactic conditions. Humidity sets in late March and gradually rise over the next 9 months. At certain times, particularly in the late summer, the humidity level rises so high that in early mornings, one can see dew on the island's vegetation and impermeable surfaces of rocks - as if the island has been washed by a night time rainfall.


Precipitation on Kish is scant and varies as in other parts of the Persian Gulf. Rainy season in this area is between late October and late April. Winds bring rain bearing clouds to the area 3 to 6 times on the average. Rainfall during fall and spring occurs mainly in the form of thunder showers, whereas in the winter, it drizzles.
The average annual precipitation on Kish Island is about 150 mm -- 82% of which occurs during winter, about 15% during fall, and the rest during spring and summer.

The 47-mile-long bike path all around the island and independent of car roads, make a scenic and especially easy way to find secluded beaches. Bike rental stations are located in some parts of the island, and bicycles, tricycles, tandem bikes, and scooters are available to rent on an hourly or daily basis.

The Greek ship has been anchored on the southwest coast of the island since 1966. The ship was built in Britain and changed owners several times before reaching the last owner, who was Greek. The ship finally went offshore of Kish, and though an attempt was made to save her, it proved futile, and she has remained in place since.

Marjan beach is located on the east side of the island and is named for the beautiful coral that can be found. The coast is lined with pergolas, which, along with the palm trees and landscaping, provide an especially panoramic view. This beach is a particularly popular site to watch an unforgettable sunrise. Many of the sea sports clubs are also located there. 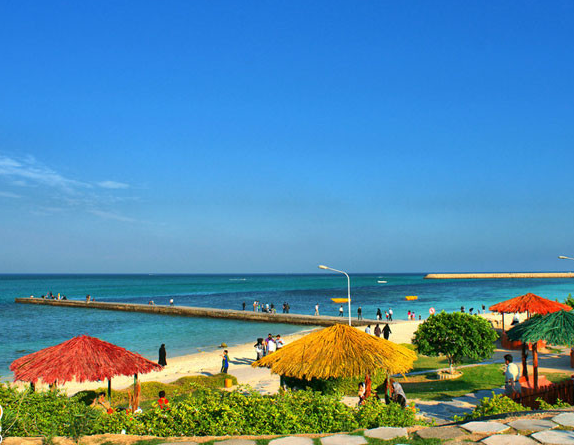 Water is a scarce resource in many parts of Iran, ancient Iranians came up with the qanat system gently sloping vertical wells that lead water into arid areas. Kariz is one such 2,500-year-old qanat, and visitors can take a walk through its tunnels and get an up-close view of this kind of system. The tunnels extend a few miles, making Kariz look more like an underground city. This ancient structure has been preserved but modernized with the addition of handicraft stalls and a traditional teahouse. 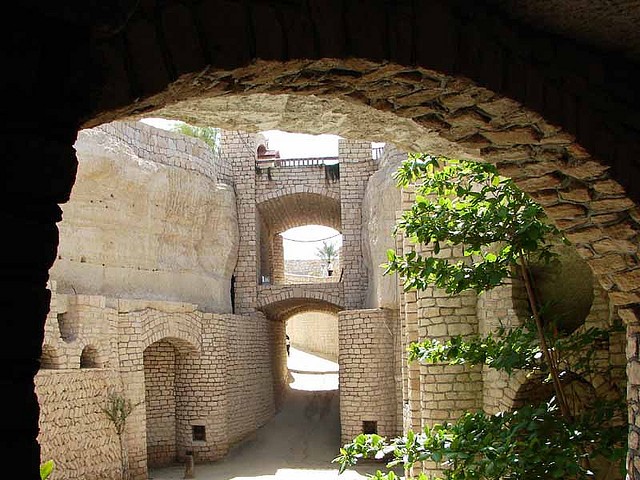 Harireh built in the 8th century is located in the central, northern part of the island. Harireh offers a glimpse of ancient architecture, and though not much of it has remained intact today, the ruins suggest a once thriving region.

The Twin Water Reservoir was rebuilt in 1993 upon remnants of an existing water reservoir, and the architecture is highly reminiscent of the water reservoirs of Yazd. The badgir (windcatchers), an ancient Persian architectural structure used to create natural ventilation, help to keep the water at low temperatures.

On the southern and western coasts of this coral island between the months of March and August, hawksbill turtles come out onto preserved lands to lay their eggs. These beaches give tourists the opportunity to view these giant turtles swimming against the waves back into the sea.

At the north of the island, a particularly green area known as the Portuguese Valley, is the location of the Green Tree Complex, built around one of the oldest lur (banyan) trees. Said to be around 600 years old. The rest of the complex provides a wonderful green space to relax for a short time.

The Dolphin Park is a 170-acre park and has a marine life with a variety of gardens like butterfly, orchid, and cactus. The dolphin house is the largest pool on the island. The park's Bird Garden includes over 47 species of birds and other animals. 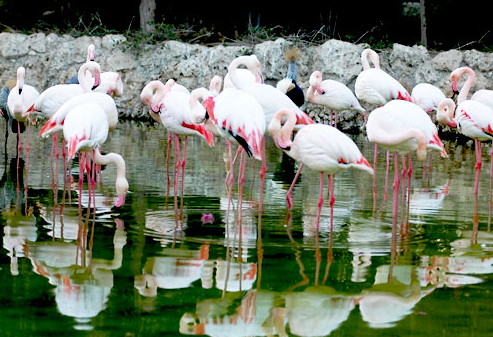 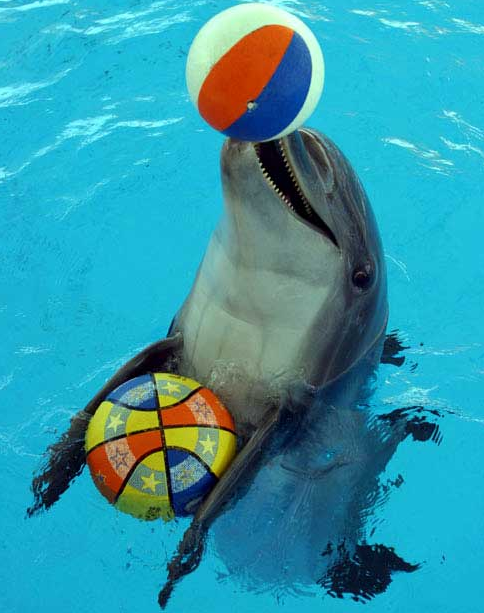 This beach is very nice for a long stroll and there are lots to see. The water is crystal clear and there are small pieces of coral lying around everywhere. Make sure you don't try to take home though as this could get you in trouble. There are plenty of places to eat along beach and lots of water sports available. 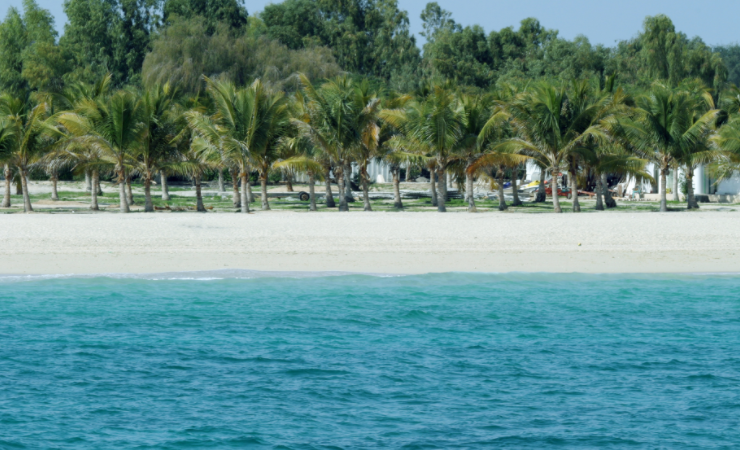 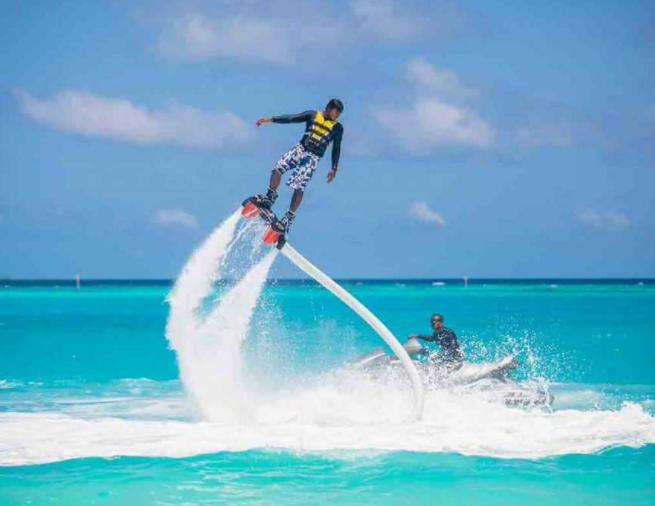 Ocean Water Park is a 5.6 hectare outdoor water park, the first Iranian themed water park and outdoor water park, themed based on the story of the Mystery of the Sun Castle. It has 13 rides, four swimming pools and one spa in addition to two restaurants, four beverage stops and coffee shops and two shopping areas. The water park has several localized features, as well as unique rides in the region. The park offers separate, exclusive days for women only. Ocean Water Park also has one of the tallest rides in the region, Pichaloop with a 24 meters drop.

Since the mid-1990s, the Iranian government has embarked on an aggressive promotional and developmental campaign to position Kish as an attractive tourist Island.

Investment incentives in the Kish free trade zone include:

Besides the existing Iranian Oil Bourse, a new exchange, the Kish Stock Exchange was inaugurated in 2010 to facilitate foreign investment and monetary activities.

Kish is home to a multi-purpose Olympic stadium seating 1,200 spectators which cater for 11 sports, including volleyball, basketball, handball, futsal, gymnastics, wrestling, taekwondo, judo, karate and chess. All of these are supervised by professional and international coaches.

The island attracts top national football teams and clubs who often use Kish as a training camp, taking advantage of its high quality facilities, good weather and tranquil environment.

The Kish Karting Track is one of the largest in Southwest Asia and one of the first of its kind in Iran.

A great array of water sports are also offered in Kish, including snorkeling and scuba diving, jet skiing, water skiing, parasailing, windsurfing, and fishing, as well as sailing and cruising on jet boats, sea skiffs, pedal boats, and banana boats, among many kinds of watercraft.